There is a significant archaeological artefact, the Cascajal Block, that remains an untranslated mystery.

A quite plausible purpose (and most of the translation) of the Cascajal Block jumped out at me straight away. After some work, I formulated an interesting hypothesis that accounts for many things, including the infamous cootie glyph and non standard writing directions.

Upfront: The skill-set I have in deciphering structured data does not come from linguistics; rather from years of deciphering undocumented file-formats, looking at memory dumps, examining data compression/representation, and reverse engineering data streams.  So, I’m applying my existing computer science skill set to a different field.  See what you make of my thoughts.

I believe the tablet to be a ‘trade ledger’, used in a bartering economy.

I colourised it to explain what I believe is going on. 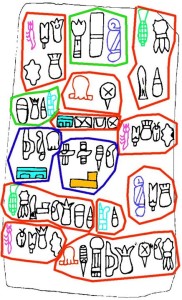 Basic assumption of barter trade. I go in and give a pig, I want a knife in return. The trader says. I wan’t your pig, but don’t have a knife. Give me the pig now and I will put a knife aside for you when someone else has one to trade. Let me write this down on the ledger so I don’t “forget”.

My explanation addresses quite a few things.

Why my interpretation holds an internal logical consistency.

As this is not my field of research, everything above is pure speculation. I certainly don’t claim to have ‘solved’ anything; I am simply making my speculations public.