Well I assume this will shortly break the Internet. Four hours ago this crowd funding campaign launched.

Somewhere in NASA an accountant looking at how to keep space exploration alive, after another round of funding cutbacks, is banging their head on a table. 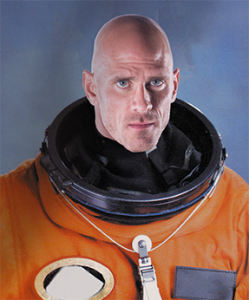 While there will certainly be much criticism, surprise, and analysis of current social values flying around the Internet; I would like to look at the science of the situation.

Sex in space is not an easy thing. Not actually what physicists mean when they refer to solving the “two body problem”… but still difficult.
Imagine you are attempting sex while ice-skating, Every thrust will simply project your partner away from you with great velocity. Then put the problem in three dimensions.

Vanna Bonta Invented a “2 suit” designed to allow astronauts to remain in close proximity. http://en.wikipedia.org/wiki/2suit but that device may not afford the camera much opertunity to create the type of film they are after.

Even after the two people are somehow joined together, there is still issues of reduced blood flow and various fluids floating around.

Not to mention having to put up with hours of endless space-sex puns.

So, Is it possible to have sex in space… well there have been a lot of astronauts in space, for six months at a time. So I would assume so.
Two astronauts, Mark Lee and Jan Davis (pictured below), basicly spent their honey moon in space. 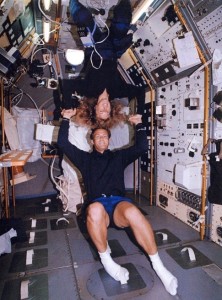 But, well, no astronauts have come out and admitted to any space hanky-panky. And who has done what in space, really is none of our business.