Bias Lighting is a light around your display that helps you perceive contrast and reduces eye stress. It also just looks just plain cool, and create a kind of relaxed vibe.

There is a lot of theory on optimising bias lighting, but really any light will help quite a bit. So why not see if we can do anything inventive with the bias lighting colour.

Lets use a bias lighting that changes colour, and experiment with:

What you will need:

WS2811 strips can be acquired via Ali Express at a reasonable price, they are a strip of RGB LED’s that are individually addressable (set any LED to any colour).

The strips look like what you see below. They can be cut to length, and have a soldered connection every 30cm or so.  The arrows indicate the direction the data signal is propagated in, your controller (eg an arduino) must be connected to the left most (first) arrow. However the voltage to run the strip can be applied anywhere.

A close up look shows a chip (black part on the left) and three LED’s, the middle one being red. 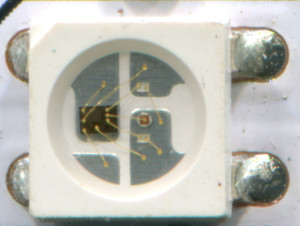 For effective bias lighting, stick an adhesive LED strip to the back of your monitor, about 5cm from the top. The arduino can be mounted with stick on velcro to what have you. If necessary, connect up multiple sections of LED strips (one for each monitor) using a good 3 core wire.

The LED strip’s data line is connected to a single arduino GPIO pin configured as an output.  Its important to note the strip has an arrow on it, this arrow shows the direction the data will travel. Your data cable must be connected to the first  LED in the strip (not the last).

For my three monitors I was able to power the strip directly from my arduino, using only USB power. Though your mileage may vary.

If you can get away with it wire up the strips shown in the top diagram. Be aware that your PC or USB hub will be responsible for providing power to a large set of lights.

Consider some issues with this:

For these reasons I would advise:

If your Arduino fails to start, or the strip displays a gaudy set of flashing bright colours, you will need to use external power to run the strip. The cutt-off regarding how long your strip can be, before problems appear varies greatly between different production runs (of the RGB strip, not the arduino).

To use an external power supply  to power the strip is not difficult (see image below). But it leaves us with the annoying issue of ground loops (see ground loop section later in this article).

To use external 5V power:

A little more safety to this circuit

The soldering of wiring to the LED strip is often problematic, and the area is often moved / stressed / bent.  This can cause the electrical connection to come loose, short or form an intermittent contact.

We may want to protect the first LED package in the strip from damage caused by too much current passing though the data line (I suggest using a 330 ohm resistor).  It’s also not a bad idea to provide a 1000uF decoupling capacitor (use an electrolytic capacitor and watch the polarity). Without this you risk a wiring issue, or power connection issue, damaging the first LED unit on the strip.

In practice, you may never have a problem without these extra components, and the damage is often repaired easily by removing the first pixel and re-soldering. So the decision is yours, a ‘best practice’ version of the above circuits is shown below. 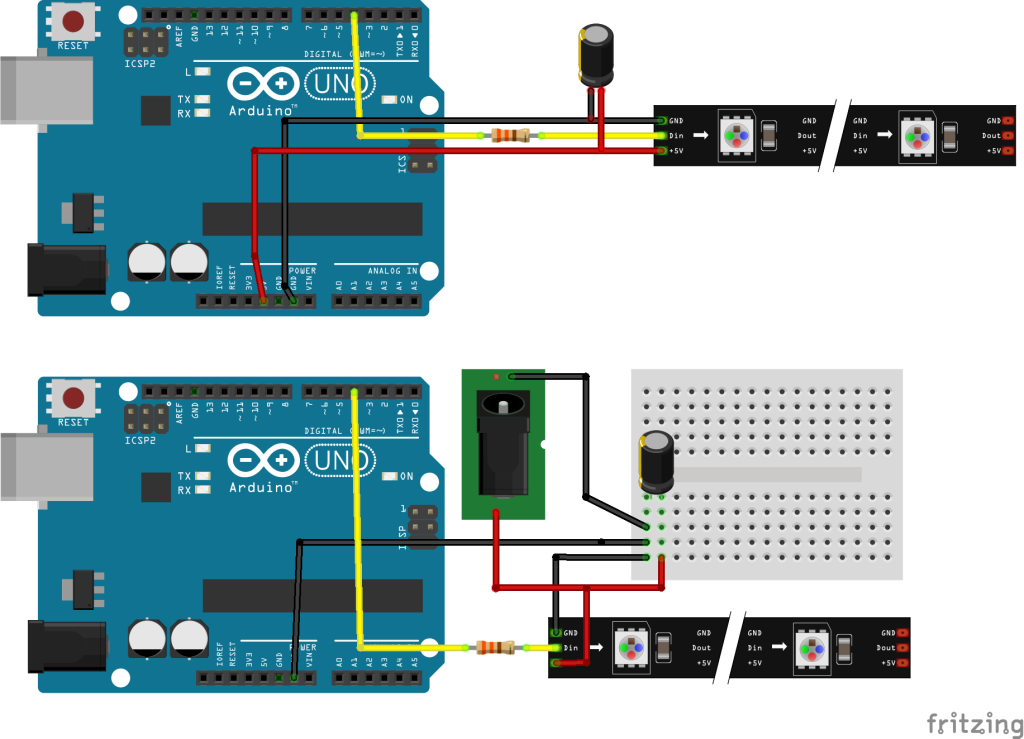 If you need more power than just the USB connection you will have to give some thought to protecting your computer from ground loops.

The possibility of a ground loop exists when your arduino is connected to the PC via a USB cable and both the arduino (or connected circuitry) and the PC are mains connected in some way (even via a plug pack).

Basic arduino code to test out the LED Strip

Now we have to check our electrical project functions as predicted. For this article, and part 2, I will be using the FastSPI_LED2 library from  fastled.io.

This demo code will create the effect shown in the video at the top of this article. If all you wanted was cool looking bias lighting, your’e done!

In a follow-up article (part-2) we will cover syncing your arduino to the computers clock, choosing good colours for different times of the day and using your location to calculate where the sun is (in case you want to tune your your lighting to the time of the day).