A friend who recently acquired a CO2 laser cutter for his school sent me a message. “What is the difference between a laser that will cut metals and one that won’t?”. I thought this is a good question, as the answer will help with understanding how to work with many materials.

But before the answer will make sense, we need to revisit the basics of how a laser cutter works in more detail.

Nick Bannon (left) and Myself (right) [amongst others not pictured], setting up the laser cutting area at the Perth Aritifactoty – 2013.

How the laser cutter works: 101

The common C02 laser cutter can be thought of as “thick” beam of IR light that moves out of a laser tube, bounces of mirrors until to get to the head. In the head it passes through a lens that focuses the beam, such that it is strong enough to ablate certain material though heat. A jet of air clears debris, and if upgraded from the piddly inbuilt compressor, will minimise scorching on materials like wood. The fact the beam is wide means that it can be bounced around off mirrors wit out imparting too much energy to one spot, such that it burns though a mirror, or the lens.

How the laser cutter works: 102 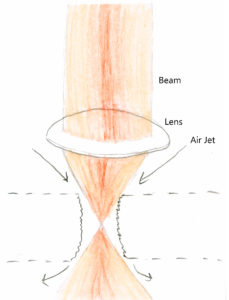 A CO2 laser produces an Infra red beam that is more intense in the centre. The beam is focused through a quartz lens.

Now think of a laser cut in slow motion and zoomed in massively.  The laser hits a material. The focal point is probably beneath the surface and the beam is still a bit wide (less hot).

The area at the surface vaporises and a little pilot hole forms. This hole is like the first domino, the material near it is now deformed. This deformed material (sub millimetre area) is like the plastic left in the sun, less robust and more sensitive to light. The cut now picks up momentum and deepens as a “pool of vaporising material eating into the ground”. The air stream is ejecting loose material and anything ‘molten’ that was not instantly vaporised.

The ability to cut well is a balance of many factors, primarily the right laser strength, air flow and movement speed – for a given material at a certain thickness.

Relevant to later discussions with metal, is getting a good movement speed.

Reading the above may lead you to think you will need to get the most powerful laser cutter you can afford, for those times when you want to do a thick material. But… power is a two edged sword. The laser will only fire at a minimum of say 40%. So your 120W laser that will get you through 20mm acrylic, won’t be any good for etching designs on clothing (it will punch straight through at it minimum of 48W).

Problems that will affect metal

Your enemy for etching, is not the heat conductivity of the metal, it’s the fact it reflects.
On cutters around your size it is often possible to etch certain metal. You will need to paint the surface with something (there are products that are sold for this purpose, but some people just use black $3 fiddly bit paint from buntings). The pit will form in the paint and you will get sufficient heat in to mark the metal. But then go no further down.

Generally laser cut metal is not ablated/vaporised (turned to gas) like other materials. It is instead it is melted (turned to liquid), and blown out of the way by forced airflow. This is sometimes referred to as ‘melt and blow’ cutting. It is messy and provides issues that can damage a machine:

Its worth mentioning that metal needs a lot more power to get the piloting pit going. And the pit is not a nice vaporised area with laser friendly material next to it. It’s a stubborn pool of liquid that sits in the way of your laser. This means cutting requires bigger lasers, or one or more assisting technologies to reduce the necessitated “bigness” of your laser.

Such assisting technologies, for CO2 lasers, may include.

As some lasers can be coerced into cutting metal, why is it not more common?

Firstly, the risk to the machine means many operators don’t feel it is worth it.

But there are other issues:

But more importantly there are many more attractive  alternatives for cutting of metal, including water jet cutting and CNC milling.

For clarity I simplified and glossed over some less important concepts in the above explanation.